In the figure above (from Dr. Tim Hain, Northwestern University), the otoconia (the particles responsible for BPPV) are illustrated within the utricle of the inner ear.  The movie below (also from Dr. Tim Hain, Northwestern University), reveals the mechanism whereby the otoconia become displaced from the utricle and become trapped in the posterior canal of the inner ear.  When the otoconia are trapped in this canal, they move within in the canal by gravity (with head movements), and elicit vertigo, which lasts until the otoconia reach the lowest portion of the semicircular canal.

The symptoms of BPPV generally include a brief sense of vertigo when lying back in bed, rolling over in bed, arising from a lying position, bending forward, or looking up. Vertigo is usually precipitated by a change of head position and typically lasts 10-15 seconds.  You may, however, feel nauseated or imbalanced for a longer period of time.  An intermittent pattern is common with BPPV. It may be present for a few weeks, then stop, then return.  It should be noted that many other disorders of the balance system have similar symptoms.  This is why testing is critical to determine the exact cause of your dizziness or vertigo.

Diagnosis of BPPV is made based on your history of symptoms and observation of your eye movements while placing your head into positions that may trigger dizziness. One position, known as the Hallpike position, involves moving from a sitting position to a lying position with your head turned to either side and observing your eye movements.  Other tests for different semi-circular canal involvement include lying with your head in various alternate positions. Our ability to diagnose BPPV is enhanced by you wearing video goggles fitted with infrared cameras so that your eye movements may be more easily visualized and recorded.

Depending on the semi-circular canal involved, specific “canalith repositioning maneuvers” have been developed to cure BPPV and are named after the doctors who discovered the technique.  These “canalith repositioning maneuvers” are intended to remove “canaliths” out of the semi-circular canal, back to where they originated, the utricle.  Each maneuver takes less than 15 minutes to complete.

The Epley maneuver was invented by Dr. John Epley and is used to treat BPPV of the posterior semi-circular canal. This maneuver involves first lying back into the position that triggers vertigo, then sequential movement of the head are made that remove the otoconia from the semicircular canal.

The Lempert roll is used to treat BPPV of the horizontal semi-circular canal.  It involves lying back on the bed, and turning the head and body in a slow 360 degree turn.

These maneuvers are effective in about 99% of patients with BPPV.   If your vertigo has not resolved after your first visit, additional appointments may be necessary to repeat the maneuver.  In some persons, the positional vertigo can be eliminated but a sense of imbalance persists.  In these cases, a course of vestibular rehabilitation may improve your sense of balance.

The recurrence rate for BPPV after these maneuvers is about 15 percent per year.  If BPPV recurs, please call us to schedule brief testing and possible additional treatment. 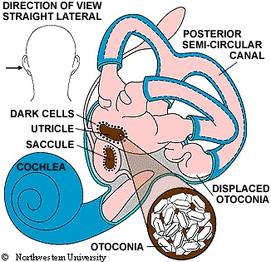