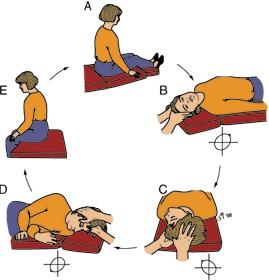 Below is an animation (from Dr. Tim Hain, MD, Northwestern University) of a modified Epley maneuver for treating right posterior canal BPPV.  The speed at which the video plays is much quicker than how the maneuver is performed in real life, but gives a nice feel for the general motions necessary. 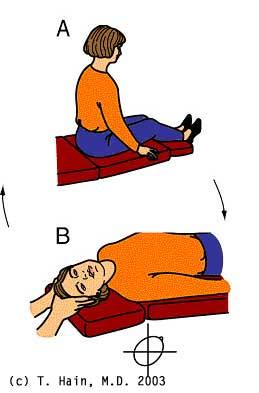 Posterior canal BPPV is the most common form of BPPV.  This condition is caused by otoconia (also known as canaliths, crystals or rocks) and is characterized by brief (10-15 seconds) vertigo associated with changes in head position.  Changes in head position typically include laying back in bed, rolling over in bed, sitting up, looking up or down.  This condition is easily cured over 90% of the time with a specific canalith repositioning maneuver (CRM).  In this case, the modified Epley maneuver is commonly used.  The Semont maneuver is an excellent alternative.

Below is a figure (from Tim Hain, MD, Northwestern University) depicting the right Dix-Hallpike position.  The patient's head is first turned 45 degrees to the right, then quickly lays back while the eyes are monitored for nystagmus.

Below is a cartoon depiction (from Dr. Tim Hain, MD, Northwestern University) of the sequence of positions necessary to complete a modified (without use of vibration over the mastoid region) Epley maneuver.

As the patient is place into right Dix-Hallpike position, an up- and left-beating rotational nystagmus develops after several seconds.  This nystagmus gradually fades, then stops.  When the patient sits back up ("Sitting"), a down- and right-beating nystagmus is present, representing the otoconia now moving in the posterior canal in the opposite direction.  This is often referred to as "unwinding".

Once posterior canal BPPV has been identified as the cause of positional vertigo symptoms, then treatment may be offered.  Below is one of several treatments that works >90% of the time to provide instant relief of symptoms - the modified Epley maneuver.

Below is a short video example of placing the patient's head in Dix-Hallpike position (in this case, to the left side), then the type of nystagmus that is observed.  In the case of posterior canal BPPV, upbeat-rotational nystagmus will be observed with the following characteristics: