Labyrinthitis is similar to vestibular neuritis, the exception being that with labyrinthitis, there is a loss of hearing.  Following is a case presentation of a patient with labyrinthitis.  You will see the nystagmus noted by viewing the video below, followed by the VNG (videonystagogram) tracings, including the portions of the testing that were abnormal and normal.

This is a 55 year old woman with the sudden onset of vertigo and imbalance.  She was admitted to the hospital, where she suffered spells of vomiting for the next several days.  About two weeks prior to onset of vertigo, she had a cold and sinus infection.  After several days, she was no longer having vertigo, but felt continuously dizzy for the next week and then only felt dizzy with head movements.  She notes a humming tinnitus (noise) in the right ear, but does not think she has lost any hearing.  Her vision is sometimes blurry and she is very tired as each day progresses.

Below is the video of her eye movements.  Please note the left-beating nystagmus, which becomes more noticeable in left gaze and less noticeable in right gaze.  This is an example of Alexander's Law as it applies to a peripheral (inner ear) type of nystagmus.  The direction of nystagmus (fast component to the left) is suggestive of a right vestibular nerve abnormality. 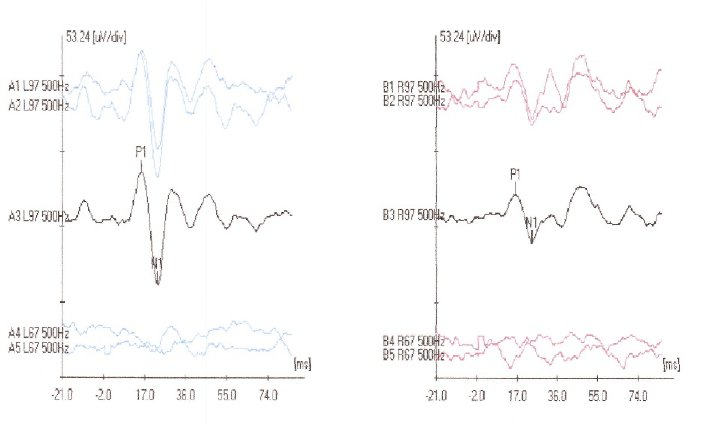 Positional testing, evaluating for nystagmus or vertigo which is dependent on head position, reveals a persistent left-beating nystagmus (see the green and red "saw tooth" waveform below) no matter what position the head is placed.  This is consistent with a peripheral (inner ear) disease.  Note the importance of: 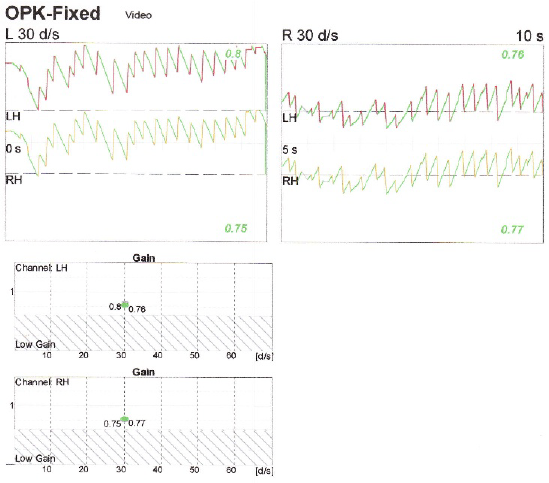 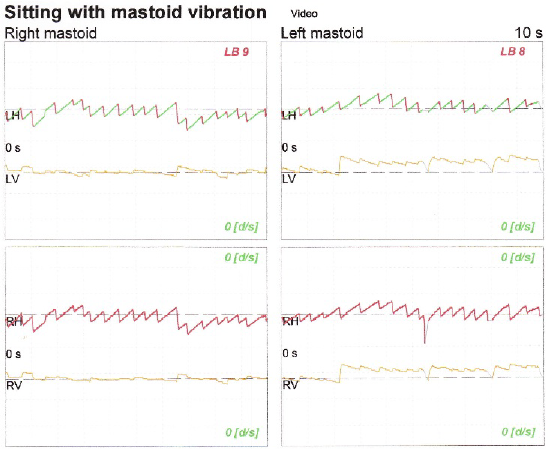 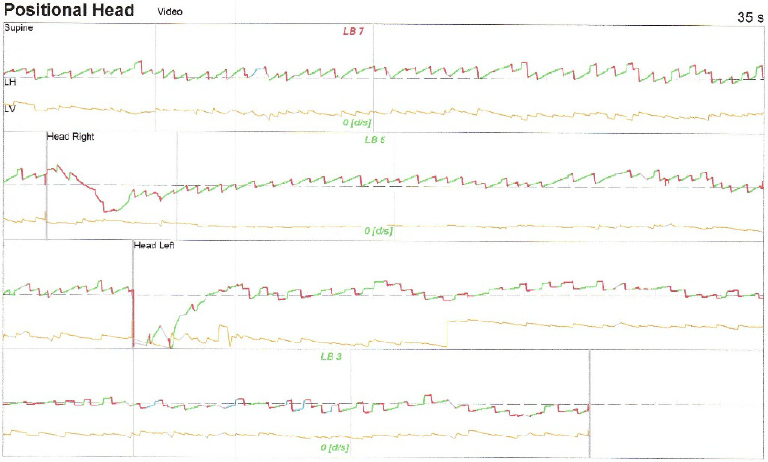 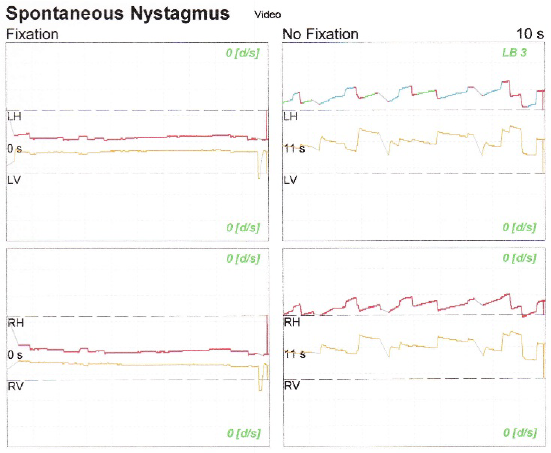 The audiogram below is the data which separates this condition (labyrinthitis) from vestibular neuritis, in that hearing has also been affected.  The blue data points represent the left ear and the red data points represent the right ear.  The red line is below the blue line, indicating that hearing on the right side is not as good as the left side and is consistent with her report of tinnitus (noise in the ear), which is a common symptom in hearing loss.

Several things are noted to enhance an abnormal nystagmus.  These include shaking your head back and forth (looking for what is called "post head shake nystagmus", hyperventilation (breathing deeply and rapidly), and placing a vibrating instrument behind the ear in the region of the mastoid bone.  Below is a videonystagmogram (VNG) tracing of enhancement of the spontaneous nystagmus noted above by vibration applied over the mastoid bone. 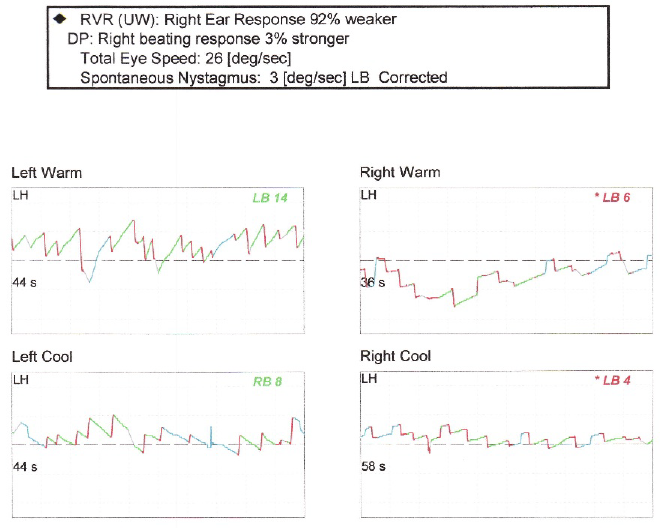 Below is a videonystagmogram (VNG) tracing of nystagmus with and without fixation.  Please note that the nystagmus is present with No Fixation (Fixation in this case is staring at a light inside the infrared video goggles), but is not present with Fixation.  Characteristic of peripheral (inner ear) disease, fixation reduces nystagmus. 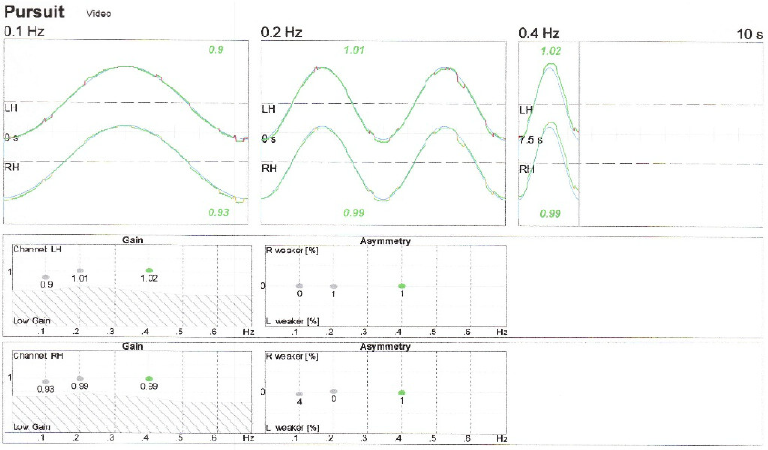 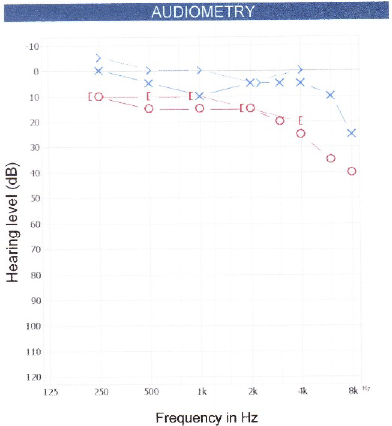 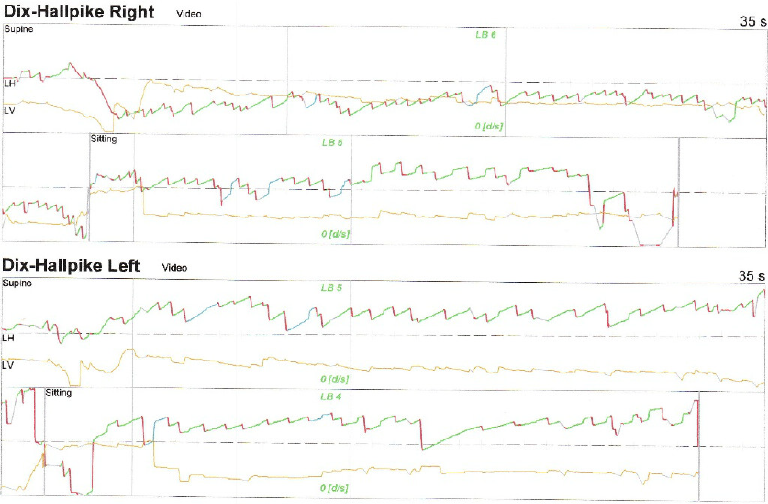 Below is the data from the rotary chair.  Note the presence of a VOR (vestibulo-ocular response) Asymmetry, as all the points plotted lie outside the white (normal) zone.  This suggests a decrease in function of one vestibular nerve compared to the other side.