Superior canal dehiscence syndrome is a rare condition, first described in 1998 in a journal article by Dr. Lloyd Minor, where the bone overlying the superior semicircular canal becomes eroded and a new 'window' into the middle ear is created.  Symptoms often include dizziness or vertigo elicited by noise or changes in spinal fluid pressure.
In the audiogram (hearing test) below, what we call a low frequency conductive hearing loss pattern is noted, involving the right (noted in red) ear.  The Vestibular Evoked Myogenic Potential (VEMP) tracing below the audiogram reveals a low threshold response for the right ear (noted in red).
To the right, a CT scan of the temporal bones (where the inner ear structures lie) reveals lack of a 'roof' over the superior semicircular canal of the inner ear (indicated by the two white arrows).
The video depicts 'Tullio' phenomenon, which is nystagmus (and vertigo) generated by noise, in this case a simple tone.
View an updated journal article by Dr. Lloyd Minor, printed in 2005. 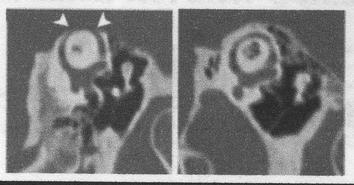 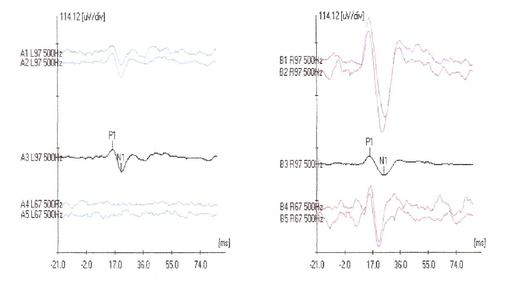 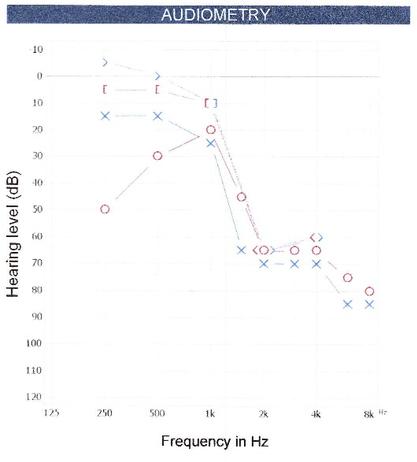 Above, the temporal bone CT scan reveals a lack of 'roof' overlying the superior semicircular canal.

Below, the video displays 'Tulio' phenomenon, which is simply noise-induced nystagmus.  This may be seen in superior canal dehiscence syndrome.

Above, the audiogram reveals a low-frequency mixed hearing loss on the right.

Below, the VEMP reveals a low threshold response on the right.