Characteristic Gait of Normal Pressure Hydrocephalus (NPH).  Note the broad-base "magnetic" (as though shoes are heavy or sticking to the floor) gait pattern with normal arm swing. 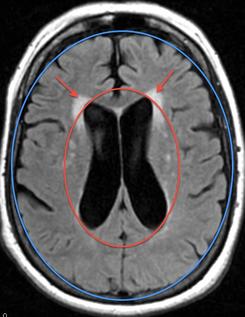 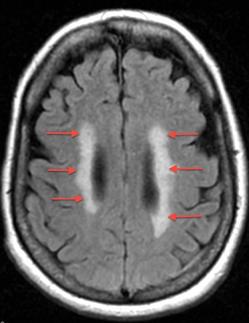 Normal Pressure Hydrocephalus (NPH) is caused by a pressure gradient in the spinal fluid-producing regions of the brain known as the "ventricles" and is depicted in the MRI picture to the right as the dark region within the red oval.  The ventricles are much larger than normal.  This enlargement of the ventricles may be see with aging, but when such enlargement is due to aging, we should also see a lot of spinal fluid (dark areas) outlining the sulci (indentations of the outer surface of the brain), depicted in the picture to the right as just within the blue oval.  When the degree of expansion (enlargement) of the ventricles (dark area within the red oval) is out of proportion to the degree of cortical (outer brain surface) atrophy (dark indentations just within the blue oval) expected, then we must consider hydrocephalus, or in this case, normal pressure hydrocephalus (NPH).  Additional findings on MRI include "transependymal flow", that is changes in the brain signal (white fluffy regions) surrounding the ventricles depicted by the red arrows in both MRI pictures.

Typical symptoms of NPH include

Diagnosis is made by MRI of the brain revealing the typical features of:

A spinal tap to remove at least 30 ml (cc) of spinal fluid is performed to see if this will improve gait.  Neuropsychologic testing may be helpful in determining whether memory loss is consistent with the pattern noted to occur in NPH.

Treatment includes placement of a "shunt" in the brain to reduce pressure within the ventricular system of the brain.  Results (before and after) of such a shunting procedure may be viewed in the to videos at the far right side of this page.

Same patient from the left after undergoing placement of a spinal fluid shunt.  Note that her gait pattern has essentially normalized.